Alopecia or hairloss is a chronic skin disorder characterized by loss of some or all of the hair from the scalp and sometimes from the other parts of the body as well. It occurs in various patterns and affects both males and females. The most common type of baldness is male-pattern baldness, also called androgenetic alopecia. It is characterized by a defined pattern of hairloss from the top of the scalp and regression of the hairline. It affects a large proportion of the population. It might start as early as adolescence and increase with age. In the white population, males in their fifties have a 50% chance of exhibiting some degree of androgenetic alopecia as against an overall average of 66%.1

Genetic and endocrinal factors play an important role but the exact cause and mechanism of hairloss is not clearly understood.2 Alopecia, except for mild itching in some cases, is not a painful or life threatening condition. It may affect the psychological wellbeing of the victim. Studies in this regard are not very exhaustive. They suggest that baldness is psychologically damaging and can cause intense emotional disturbance. It can lead to personal social and job-related problems.3 Hair has always been an important aspect of one’s image or identity particularly for women.4 Among the women suffering from alopecia, around 40% experienced marital problems and 63% suffered career related problems.5 Over all such people feel more social discomfort, and suffer from low self-esteem. In more than 30% of the cases specific problems are attributed to hairloss.6

A study revealed that males who had more profound hairloss were more dissatisfied with their appearance and were more concerned with their older look than those with minimal hairloss. This effect cut across all age groups but was more prominent in the younger age group.7

Androgenetic alopecia is a poorly understood progressive condition. Androgenic hormones are involved in its pathophysiology. This renders treatment difficult and complex. The androgen receptor antagonists used to treat women are not suitable for men because of the potential risks of gynaecomastia, feminisation, and impotence. In the absence of an understanding of the pathophysiology, it is not possible to attack specific areas.

There are four options for androgenic alopecia available to the patient:

Each of these has its own advantages and disadvantages. As far as medical treatment is concerned, the two that are approved by the FDA in the USA for the treatment of androgenetic alopecia in men are:

Minoxidil is an oral antihypertensive drug which has a side effect of excessive hair growth. It is used topically to treat baldness. Though it results in hair growth in most patients, the hair grown is generally indeterminate rather than true terminal hair. The hair sheds when treatment is stopped.9 Its main benefit is in arresting the progression of balding.

Finasteride is a potent 5á­reductase type 2 inhibitor.10 Its main action is to lower circulating dihydrotestosterone by inhibiting its production by the prostate, rather than affecting the metabolism of the androgen in the hair follicle. Loss of libido is one of the important side effects of this oral therapy.

Synergistic effect of the local application of minoxidil finasteride

The effect of the novel combination was observed in a study. The subjects were divided into three groups.

The important aspect of the study was the fact that none of the parties involved viz. the clinical / research staff, the study sponsors or the subjects in the three groups were aware of the various groups until the data was collected in the verified database. The subjects were evaluated every six months with the help of a subjective questionnaire, objective examination and close-up photographs. 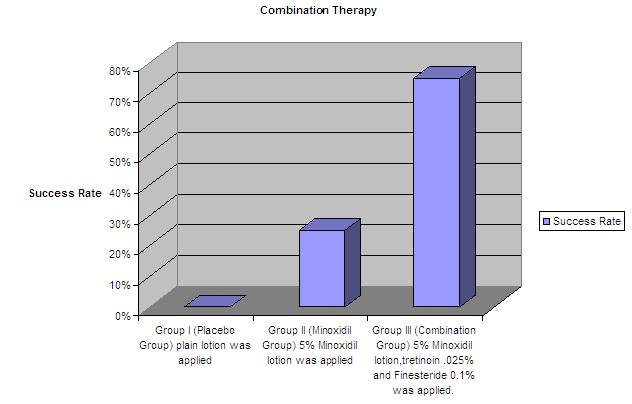 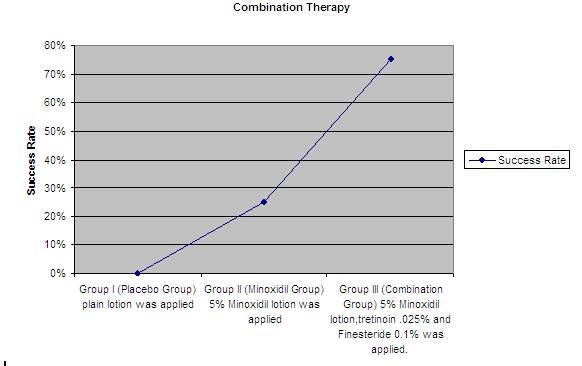 This study indicates that topical application of Minoxidil and Finasteride leads to better hair growth. Combination therapy was thrice as effective as any one of them. These results were documented in a triple-blind clinical trial using a subjective questionnaire, objective examination and close-up photographs. The findings are statistically significant. The study design and objective evaluation rule out observer bias, a common source of error in clinical trials. The two drugs have different route of action and combined use allows for a dual action. It may also be possible to reduce the dose of each drug, decreasing their individual side-effects.

A combination therapy of Minoxidil and Finasteride shows great promise in the treatment of hitherto difficult condition Alopecia androgenetica. It may potentially become the main stay therapy in this condition.