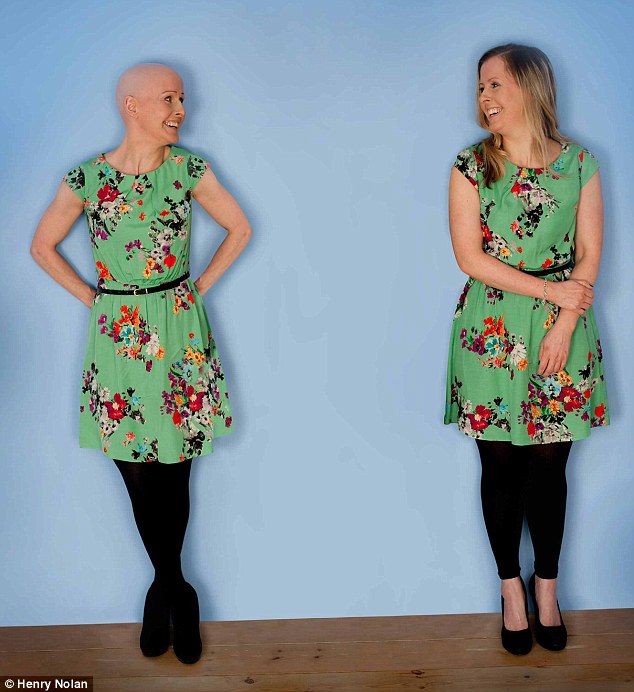 As girls, they insisted on matching outfits, right down to the ribbons in their blonde pigtails. And as teenagers, identical twins Gwennan and Elin Thomas were inseparable, even going to the same university.

‘We were, and are, best friends,’ says Gwennan. ‘I had a freckle on my forehead as a baby – which disappeared – and that was how our parents told us apart. Looking at some childhood photos, we still argue about who is who.’ Yet, in 2002, a shocking, inexplicable event would mark the sisters apart.

That year, Gwennan, then 25, was diagnosed with alopecia, a condition that causes hair loss. She suffers from the most extreme form, alopecia universalis, and has lost all body hair, including her eyebrows and eyelashes. Ten years on, she can still remember the morning she woke to find clumps of hair on her pillow. ‘I burst into tears,’ she recalls. ‘My hair had been thinning for a while but then it started falling out in clumps pretty much overnight.’

Alopecia, which is thought to affect about one in 100 Britons at some point, occurs when the body’s immune system starts to attack its hair follicles. This can be limited to just a patch, but some patients go on to develop alopecia totalis, where the entire scalp is affected, or alopecia universalis.

What makes Gwennan’s experience extraordinary is that her identical twin sister Elin remains completely unaffected, even though the sisters share exactly the same genes.

Historically, because alopecia is clustered within families, it was thought to be an inherited condition. However, the experience of Gwennan and Elin points to strong non-genetic causes. Experts believe theirs, and a handful of similar cases, are proof that environmental factors are a major risk in developing the condition – and that this discovery will pave the way for a new understanding of this devastating, difficult-to-treat problem.

‘In identical twins with alopecia, about 50 per cent both have the condition. That means roughly half of the contributing causes of alopecia are non-genetic and may be environmental,’ says Dr. Angela Christiano, a world leader in the study of alopecia based at Columbia University Medical Center.

Twins provide the perfect platform to study these environmental causes, because it’s likely most things about their environment and upbringing are the same. So, for science, twins such as Gwennan and Elin are fascinating.’

For the twins, the effect was devastating. Gwennan admits she struggled with feelings of jealousy and resentment towards her sister, while Elin experienced intense guilt that she had escaped the condition that threatened to destroy her sister’s confidence.

‘I’d look in the mirror and recoil at my reflection – I thought I looked like an alien,’ says Gwennan, 35, an office manager who lives in Cardiff.

‘Losing my eyebrows and eyelashes was even more traumatic as those define your facial features. And it made it worse having a sister who was the mirror image of me – but with hair. Of course I didn’t want Elin to suffer too, but every time I looked at her I was reminded of what I’d lost.’

Elin, a catering manager, says: ‘I knew I was the lucky one and that compounded my feelings of guilt.’

Gwennan remembers her hairdresser pointing out a bald patch the size of a 50p piece on the back of her head in April 2002.

‘I told myself it was probably nothing but I went along to my GP anyway,’ says Gwennan. ‘He told me it was probably a skin infection and prescribed an anti-fungal cream. But a few weeks later I noticed my hair was noticeably thinner. Elin and I both had the same hairstyle, but while her hair was thick, mine was really thin and bald patches were starting to appear.’ 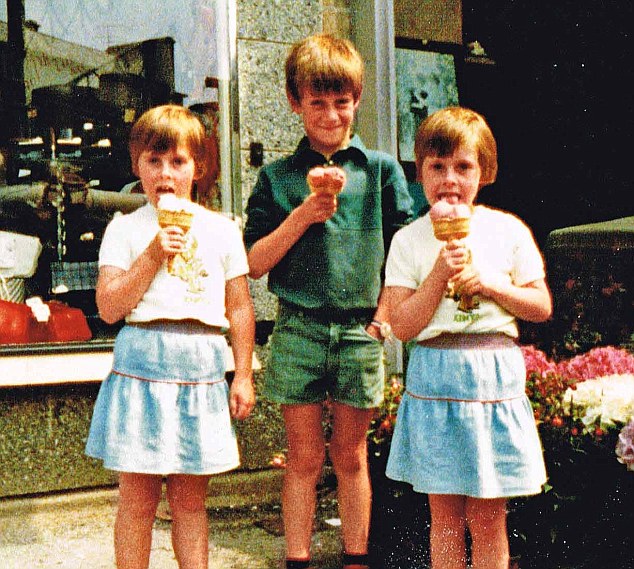 By October, most of Gwennan’s hair had fallen out, and she was referred to a dermatologist. ‘He immediately identified it as alopecia,’ she says. ‘I’d been having problems at work and he said it could be stress-related or there could be a genetic reason, but that was unlikely as my twin was unaffected. He told me my hair was unlikely ever to grow back. He was very blunt about it.

‘I was so upset but I felt relief I finally had a diagnosis. That night I shaved off all my hair, which I decided was preferable to seeing it fall out. In a way it was liberating as it gave me some control.’

But the twins did not realize their experience would add weight to the research being carried out by Dr. Christiano, herself an alopecia sufferer who is now in remission.

‘Twins are usually raised in a similar environment so we can rule out causes such as diet or exposure to toxins,’ she says.

‘Both may carry an identical set of genes predisposing them to alopecia, but the degree to which those are expressed may differ. There may be something, for example reaction to stress, which causes the gene to express itself in one twin but not in the other.’

Dr. Andrew Messenger, consultant dermatologist at the Royal Hallamshire Hospital in Sheffield and an expert on alopecia, says: ‘We now know alopecia is not 100 per cent inherited, but there is clearly a genetic component. Unfortunately, the more severe the disease, the less likely the patient is to recover. The average age of onset is 25 to 30 and it seems to affect men and woman equally.’

The twins suffered eczema and a dairy allergy as children – both of these diseases are thought to be due to problems with the immune system, although immunologists have assessed Gwennan and found nothing unusual.

Dr. Christiano says: ‘In families where these autoimmune genes appear to cluster, we can say their immune systems are generally susceptible, but we don’t yet understand why in one their joints may be affected and in another, their hair follicles.’

For four years, Gwennan concealed her baldness with headscarves and a £4,000 wig. ‘My confidence hit rock bottom and I just wanted to feel normal again,’ she says. She also had to contend with stares and hurtful comments. ‘People would ask me if I had cancer. Even my friends could be incredibly insensitive, talking about “bad hair days”. It made me realize how much people judge you by your appearance.’

Counseling helped Gwennan come to terms with her condition, and in 2009 she ditched the wig for good during a holiday in Cyprus.

‘I wasn’t going to hide any more. I had a long heart-to-heart with Elin and admitted I’d struggled with resentment and bitterness in the past, while she revealed how guilty she had felt that it hadn’t happened to her. I haven’t worn a wig or a bandana since. It’s been a very emotional journey but I’m not even sure I’d want my hair to grow back now. Losing my hair has made me the person I am today.’

Elin remains mindful that, given the genetic link, she too could well experience alopecia. ‘I’m prepared for that,’ she says.

‘I’ve seen how amazingly Gwennan has coped and she’s a real inspiration. She’s living proof that you can have alopecia and still hold your head up high.’