Surgery started at 10am and finished at 6:50pm
Michael Gray said he was conscious of how he looked due to working in the media

Sports pundit and former-England footballer Michael Gray has undergone the first UK hair transplant to be streamed live on the internet.

Some 22,000 people with strong stomachs watched Dr Bessam Farjo perform the surgery, which began at 10am yesterday morning and finished at 6.50pm.

Tweeting after his procedure Mr Gray, 37, from Sunderland, said: ‘Well what a day I’ve had 2day. Head is a little sore right now but worth it. Thankyou to @BessamFarjo and his lovely team.’

Dr Farjo took more than 5,000 healthy hair follicles from the back of Mr Gray’s head and implanted them at the front of the scalp after making hundreds of incisions.

The TV presenter also answered questions via Twitter during the procedure. 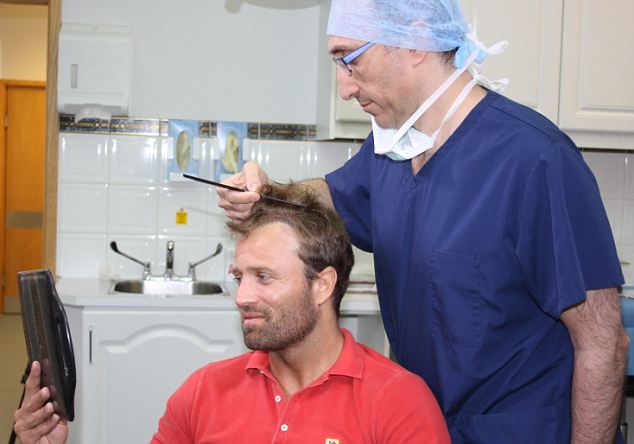 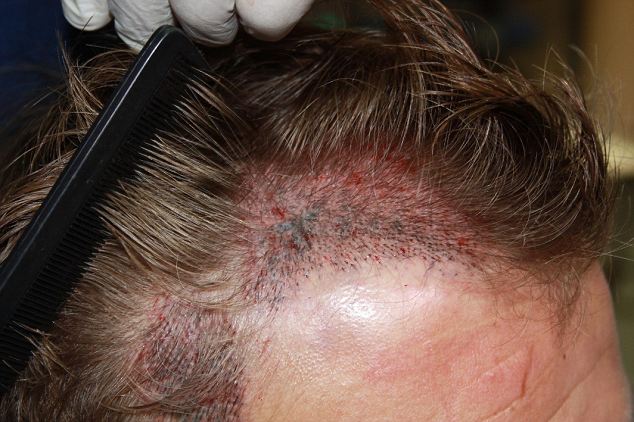 Undated handout photo issued by Peppermint PR of surgeon Dr Bessam Farjo, with former England footballer Michael Gray, part in the UK’s first live broadcast of a hair transplant today. PRESS ASSOCIATION Photo. Issue date: Monday June 11, 2012. Some 22,000 people watched the seven-hour operation, thought to be the first of its kind to be streamed live in the UK. Gray, 37, who played for premiership teams including Sunderland, Blackburn Rovers and Sheffield Wednesday during his career, took part in a real-time question and answer session as well as Tweeting through his surgery. See PA story HEALTH Hair. Photo credit should read: PA Wire NOTE TO EDITORS: This handout photo may only be used in for editorial reporting purposes for the contemporaneous illustration of events, things or the people in the image or facts mentioned in the caption. Reuse of the picture may require further permission from the copyright holder.

Mr Gray, who played for premiership teams including Sunderland, Blackburn Rovers and Sheffield Wednesday during his career, noticed he was receding when he was about 27.

After seeing other celebrities such as Wayne Rooney undergo the procedure, he decided to go under the knife.

‘I think it’s more acceptable now and that was one of the reasons that I wanted to go through with it,’ he said before the operation.

‘Cosmetic surgery now is an everyday occurrence. People might be out there and may be worried about the operation and if I’m going to get it done then why not let people see it.

‘There’s a lot of people out there who are worried about it. Here they can see it from start to finish.’

He said the transplant would help improve his confidence.

‘I’m working in the media at the moment and doing quite a lot of the TV and when I watch myself back I’m conscious about the way I look, so from the confidence side of things I’m hoping that will beat that.

‘People refer to the harrowing experience a woman must go through when losing her hair, however it can be equally upsetting for men, who can suffer from a severe loss of self-esteem.

‘I hope the live broadcast will help us to educate people about hair transplant surgery and open up discussions around the solutions available to those experiencing hair loss.’

The transplant involves taking 3,500-4,000 hairs from the back and sides of his head and “re-planting” them into his receding hairline, said Dr Farjo.

The surgeon, in his 19th year of carrying out hair transplants, said: ‘Think about it as similar to gardening. We’re removing bulbs of hair from one part of the scalp to another but we can’t pluck it out, we have to move it with the bed around it, like soil.

‘As long as you keep it alive, keep it in its soil, it picks up again.’

The procedure involved a team of two doctors and eight nursing technicians.

After the operation, the hair will start to gradually grow and the full results will be seen in eight to 12 months, he said.

Dr Farjo, medical director of the Institute of Trichologists, said hair transplants have become more common as views on cosmetic surgery have changed and more celebrities have undergone the operation.

‘Obviously 20 years ago people generally had a different attitude or feeling about things like cosmetic surgery and lifestyle issues, it was very much not talked about. It’s a far cry from where we are now,’ he said.

Michael Gray (Right), pictured here in 2006 playing for Blackburn against Robbie Keane’s Tottenham, was known for his flowing blonde locks.However, he said many people still have questions: ‘No matter how much information they arm themselves with it’s hard for them to imagine what it’s like.’They say a picture speaks a thousand words and it’s basically like that.’I believe this is the first time a surgeon has attempted to broadcast a hair transplant live in the UK.’

The event was hosted by Brian Beacom – author of Diary of a Hair Transplant: A Journalist’s Search for David Cassidy Hair.

Dr Farjo added: ‘Our broadcast is intended to orchestrate a pioneering moment for the hair loss community, as well as the surgical field, giving the nation a first-hand look at the procedure and helping to dispel misconceptions around hair transplant surgery.’