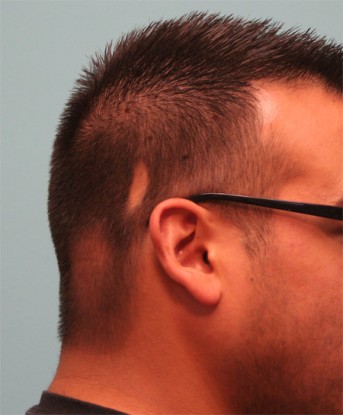 Bay Area hair restoration surgeon, Sara Wasserbauer, M.D., will perform a pro bono hair transplant on a young man who battled a brain tumor eight years ago. The surgery will be broadcast live on TheBaldTruth.com on July 30, 2012 at 11:00 a.m. PST.

Carlos Cabrera was just 18 years old when he was diagnosed with a rare brain tumor called ganlioglioma. He underwent surgery and four months of radiation when other kids his age were thinking about prom and college. Although he now enjoys a clean bill of health, the combined surgery and radiation caused uneven hair loss and scarring on the back of his head. Now, eight years later at the age of 26, Dr. Wasserbauer is trying to help Carlos move forward without feeling self-consciousness about his appearance.

Dr. Wasserbauer will perform a follicular unit extraction (FUE) hair transplantation on Carlos that will take individual grafts from other areas of his head and transplant them to the areas in the back of his scalp that have stopped growing hair as a result of the radiation. The surgery will even out the distribution of hair so that the back of his head looks more natural and signs of his surgery and radiation are less noticeable.

“When we first met Carlos and heard his story we knew we could help,” said Dr. Wasserbauer. “We know how difficult it is for Carlos to move on with his life when he sees the scars from his brain tumor every time he looks in the mirror. Despite his gratitude for his current good health, Carlos is self-conscious about his appearance. He constantly feels like people are taking notice of his scar and hair loss. We feel blessed to be able to give Carlos the gift of hair restoration.”

When consumer advocate Spencer Kobren heard about Carlos’ case and what Dr. Wasserbauer was doing, he inquired about the opportunity to broadcast the hair transplant live on his website – TheBaldTruth.com – to highlight the fact that there are hair restoration treatments for people that have experienced hair loss as a result of medical procedures. The hair transplant footage will also be archived on the website for future viewing.