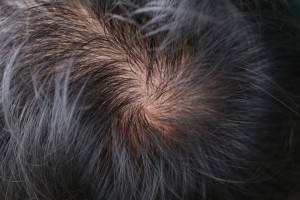 For decades, scientists have been researching ways to reverse Alopecia Areata, a condition that causes round patches of hair loss. Alopecia Areata can eventually lead to total hair loss on the scalp, leaving the person completely bald. There are several treatments out now, such as minoxidil sprays, that can help regrow hair, but nothing to quite cure this condition. However, a few weeks ago, scientists decided to test three men in the UK who were suffering from Alopecia Areata and give them a drug normally used to treat bone marrow disorders, something that had never been done before.

This medication, called ruxolitnib, is normally used as a treatment of intermediate or high-risk myelofibrosis, a type of bone marrow cancer. After seeing increased hair growth in patients who were on a regular dosage of this medicine, scientists wondered if it would work on those suffering from hair loss. The three men that were used as subjects took this medicine for five months, twice a day, and all three men saw total hair regrowth. After these five short months, all three men had a full head of hair.

This study was done by researchers at Columbia University. Lead researcher, Dr. Raphael Clynes said: “We’ve only begun testing the drug in patients, but if the drug continues to be successful and safe, it will have a dramatic positive impact on the lives of people with the disease.” (BBC) Now, more doctors are joining in on this remarkable discovery on the road to coming up with a solution.

More research is needed before the drug will be offered across the globe to solve alopecia areata, but for now, the results of these three brave men are a huge step in the right direction.