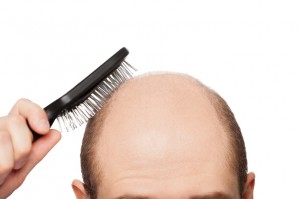 Dihydrotestosterone is a chemical we have referred to in several of our articles. Commonly abbreviated as DHT, this chemical is a male hormone, converted from testosterone. High levels of it are the main cause of hair loss in men and women. However, there is more to it than just that.

Before we get into why an abundance of DHT is bad for those of us who want to keep our hair, there are actually DHT enthusiasts out there.  As we all have come to know, there are two populations among hair loss: those who are reluctant, and those that don’t care. A percentage of the latter makes up the enthusiasts. According to some possibly biased research, DHT is a “stronger” form of testosterone.

DHT is synthesized from testosterone daily, in both men and women. 5-10% of a male’s testosterone will be converted until their genetics or glands cause an increase of testosterone for conversion. In both sexes, a higher conversion rate begins around the time of puberty, however there is a large defining feature of it in males. DHT is what causes the formation of the male genitalia during fetal development. A lack of it throughout ontogeny will cause underdeveloped genitalia, as well as an underdeveloped prostate.

Knowing how important DHT is to the development of the male body, it is clear why many men don’t take it for granted. Those that embrace DHT have done their share of research on its benefits, and without a guess, you can find a few body building articles on it. Heralded as “3 or more times as powerful of regular testosterone,” DHT is cherished by those looking to build strength and muscle. DHT is known to play a role in not only sexual development, but also the enhancement of muscles, and hair loss.

An abundance of DHT has a variety of effects on both genders of the human population. Although mainly active during and after puberty, it is present in the body prior to this. In terms of puberty, it controls the production of body hair, hormonal processes such as menstruation (women) and sperm production (men), amongst other hormonal changes. Later, if an abundance occurs, balding can arise.

Male Pattern Baldness, or MPB, is the corner stone result of an abundance of DHT. Hair follicles are sensitized when presented to DHT, causing them to shrink and having a shorter lifespan as opposed to the normal hair growth cycle of several years.  Hair has three phases in its life cycle: growing, resting, and dying. During MPB, the growing phase fades as the resting phase increases in duration.

Since baldness happens mostly on the scalp, this is the main area scientists and researchers study when exploring the causes and cures for baldness.  The follicle bulb, containing the dermal papilla, is responsible for hair growth. It produces and divides the cells that make up hair follicles, and although hair is dead flesh, it is a result of the papilla getting nutrients from surrounding blood capillaries beneath the scalp.

When there is an abundance of DHT, it can block or implicate the absorption of nutrients to the dermal papilla. Once this happens, MPB or other forms of baldness can occur. Hair thinning is another effect that can result from DHT. As the hair follicle weakens and shrinks, the hair will also shrink and have a thin appearance. It can also fade in color, becoming lighter until hits the point of near transparency like the small furs that cover a majority of the human body.

There are several forms of baldness, not all caused by DHT:

–          MPB, sometimes referred to as Andogenetic Alopecia, is a form of baldness that miniaturizes hairs, and causes random areas of the scalp to become bald, tending to connect and create the “pattern” effect

–          Anagen Effluvium is rapid hair loss, usually caused by chemotherapy. The division of hair cells is halted, but as noted, an abundance of DHT can stop the dermal papilla from getting nutrition, thus also halting cell division

–          Telogen Effluvium is an extreme form of shedding, usually experienced as a result of trauma, infection, stress or surgery

–          Regular balding, beginning with a receding hairline and a bald spot in the middle of the scalp

Although, not all baldness is caused by DHT, because DHT tends to affect the hair follicles and the division of hair cells beneath the scalp, many hair care and hair growth treatments target the scalp. Currently, the big chemical in the hair regrowth niche is Ketoconazole, an antifungal medication that cleanses the scalp of fungal infections, the fungi that causes dandruff, and DHT. These treatments are usually products such as shampoos and conditioners, but there are also topical solutions containing other chemicals.

DHT is a big problem when it comes to hair loss and baldness. However, it is also a main ingredient in the make-up of the human male. It’s not all bad, but just like most things, it’s best in moderation.